When I returned home at about 2:30, the threat sharing platform was flooded with posts about various NHS systems all across the country being hit, which was what tipped me of to the fact this was something big. Although ransomware on a public sector system isn’t even newsworthy, systems being hit simultaneously across the country is (contrary to popular belief, most NHS employees don’t open phishing emails which suggested that something to be this widespread it would have to be propagated using another method). I was quickly able to get a sample of the malware with the help of Kafeine, a good friend and fellow researcher. Upon running the sample in my analysis environment I instantly noticed it queried an unregistered domain, which i promptly registered.

Using Cisco Umbrella, we can actually see query volume to the domain prior to my registration of it which shows the campaign started at around 8 AM UTC. 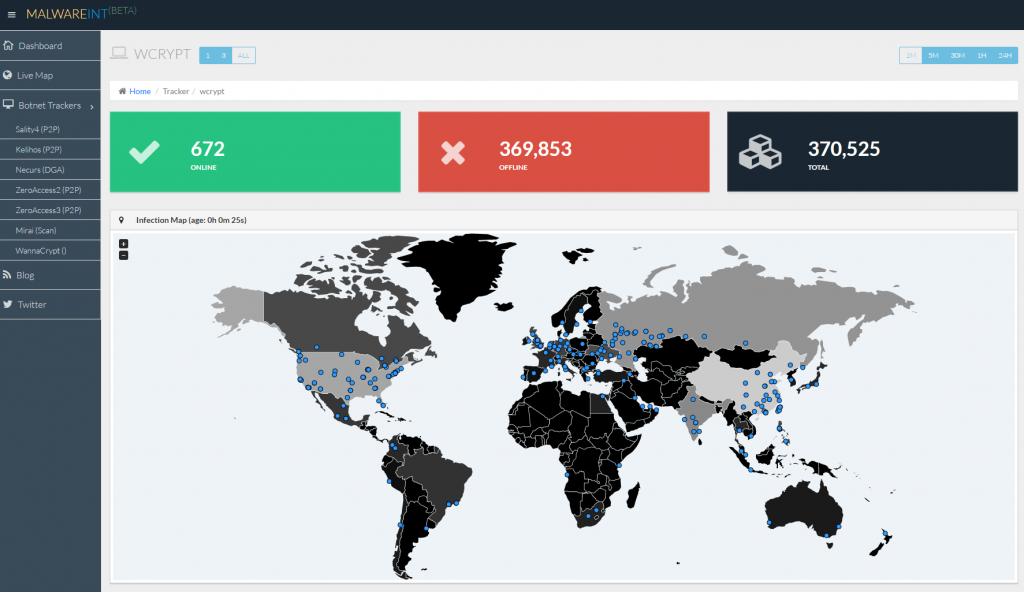 While the domain was propagating, I ran the sample again in my virtual environment to be met with WannaCrypt ransom page; but more interestingly was that after encrypting the fake files I left there as a test, it started connecting out to random IP addresses on port 445 (used by SMB). The mass connection attempts immediately made me think exploit scanner, and the fact it was scanning on the SMB port caused me to look back to the recent ShadowBroker leak of NSA exploits containing….an SMB exploit. Obvious I had no evidence yet that it was definitely scanning SMB hosts or using the leaked NSA exploit, so I tweeted out my finding and went to tend to the now propagated domain.

Around 6:23 PM (BST) I asked an employee to look into the worm code and verify the domain we registered would not change (some malware will periodically change the domain using an algorithm, so we needed to know if there would be new domains so we could register those too), meanwhile I performed some updated to the live map to deal with the rapid influx of new visitors.

After about 5 minutes the employee came back with the news that the registration of the domain had triggered the ransomware meaning we’d encrypted everyone’s files (don’t worry, this was later proven to not be the case), but it still caused quite a bit of panic. I contacted Kafeine about this and he  linked me to the following freshly posted tweet made by ProofPoint researcher Darien Huss, who stated the opposite (that our registration of the domain had actually stopped the ransomware and prevent the spread).

Having heard to conflicting answers, I anxiously loaded back up my analysis environment and ran the sample….nothing. I then modified my host file so that the domain connection would be unsuccessful and ran it again…..RANSOMWARED.

Now you probably can’t picture a grown man jumping around with the excitement of having just been ransomwared, but this was me. The failure of the ransomware to run the first time and then the subsequent success on the second mean that we had in fact prevented the spread of the ransomware and prevented it ransoming any new computer since the registration of the domain (I initially kept quiet about this while i reverse engineered the code myself to triple check this was the case, but by now Darien’s tweet had gotten a lot of traction).

All this code is doing is attempting to connect to the domain we registered and if the connection is not successful it ransoms the system, if it is successful the malware exits (this was not clear to me at first from the screenshot as I lacked the context of what the parent function may be doing with the results).

This site uses Akismet to reduce spam. Learn how your comment data is processed.